You’re offline. This is a read only version of the page.

Many years ago, the Cajuns of South Louisiana celebrated an old custom that they brought from their native France and Acadia. When the Cajuns first settled in the swamps and woods of Southern Louisiana, they had no refrigeration. As a solution, each family would wait until the appropriate time each fall to butcher the hogs to have meat for the winter. They would crisscross the countryside, taking time to help each other finish their "boucherie." When the duties were complete, the families would gather round a warm fire and enjoy a feast prepared for that special occasion. When it was time to go home, each family would get a certain portion of the butchered hog as their share of the day's work. In this way, the Cajuns banded together and learned to survive.

To keep this heritage alive the Sorrento Lions Club members would hold a small gathering in the fall each year, called a "boucherie." This gathering began in the 1960's at George Savario's camp located in Acy, just east of Sorrento. He was a Lions Club Charter Member and Mayor of Sorrento. In 1978, three Lions Club members, John N. LeBlanc, Sr, A. J. Kling, Jr and Roland Melancon suggested turning the "boucherie" into a large festival that is now a three-day event and open to everyone.

In the early 1980's, Mayor John N. LeBlanc, Jr. and the Town Council passed a resolution requesting the Louisiana Legislature to name Sorrento the "Boucherie Capital of the World." This resolution was presented to Senator Joe Sevario and Representative Juba Diez. With their help, the Louisiana Legislature proclaimed Sorrento the "Co-Boucherie Capitol of the World." Sorrento shares this title with Marksville, Louisiana, who puts on a similar festival.

Since 1981, there has been a "Cracklin Cooking Contest" to name the "Cracklin' Cooking Champion". This champion represents Sorrento at various functions throughout the year. In 1987, a "Champion of Champions Cooking Contest" began. This contest has former Cracklin Cooking Champions competing against each other for the prestigious title. In 1995, a "Jambalaya Cooking Contest" began. Every year, a Beauty Pageant crowns "Miss Boucherie." In the beginning it was only for the "Miss" category, but in 1986, the pageant opened up to all age groups. Due to the effects of Hurricane Katrina, the 2005 festival wasn't held until April, 2006. It turned out to be one of our best festivals in years.

In 2011 the festival lost its permanent location in Sorrento and struggled to find a new home. At the same time the number of the event's original founders dwindled, which caused a hiatus of five years. In 2015, a group of younger town residents came together to reform the Sorrento Lions Club under the guidance of a few original members. They felt the need to breathe new life into the club, primarily to help the community and to bring back the Boucherie Festival. The excitement of a new festival piqued the community's interest and membership in the club swelled to 14 new members.

In August 2016, the community experienced a devastating flood just a few short weeks before the festival. The Lions Club came together to help each other and their community recover from the flood. Naturally, they talked about the festival and began discussing delaying the event for another year to allow the community to recover. In the end, it was decided that the only way to begin the healing process would be to have the festival as planned and bring the community together for a weekend of fun and relaxation. In October 2016, the 35th Annual Boucherie Festival was held at Lamar Dixon Expo Center in Gonzales, LA, just a few miles north of Sorrento. The event was a success and was held at Lamar Dixon annually for four years.

For 2022, the Boucherie Festival is returning to Sorrento bringing hot air balloons to the weekend's festivities. Our event has been renamed the Boucherie & Balloon Festival. We are proud to be taking on this endeavor of providing our community with a family-friendly, Cajun festival that draws crowds from all over South Louisiana. The 2022 festival is sure to be one for the books & we hope to see ya’ll out there! 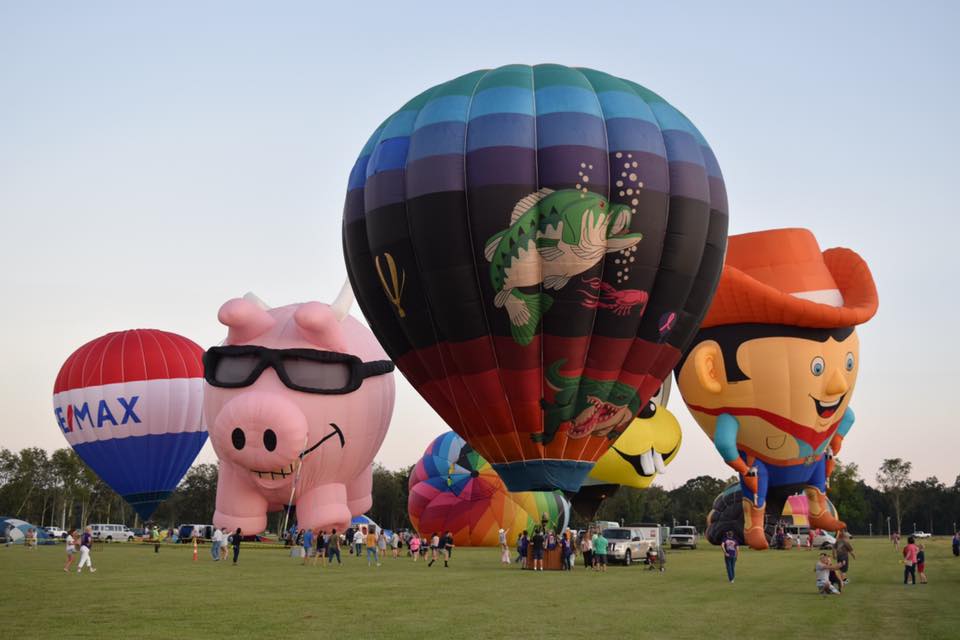